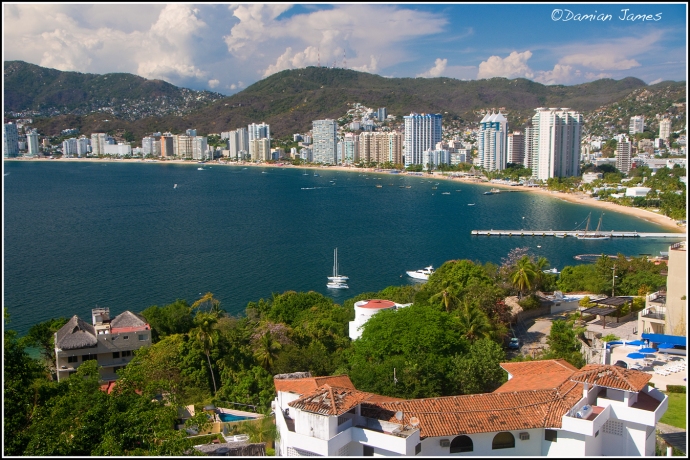 “Destinations have periods of time.” Those were the preluding words of my friend Piquis Rochin in our interview back in February. Piquis is the Director of International Promotions for Acapulco, Mexico. To quote her is the most appropriate way I could think of to begin this feature, as she is without a doubt the most experienced and educated individual on the topic I am about to discuss:  Tianguis. The word Tianguis means “marketplace” in Nahuatl, the native language of the Aztec Empire. It is Mexico’s biggest and most important travel convention and the largest of its kind throughout Latin America. For the past 40 years, Tianguis has provided the grandest stage for tourism professionals to engage in the business of promoting travel to Mexico, and this past March it returned to the place where it all began 40 years ago:  Acapulco. One person has been there since the beginning to see it grow, evolve and inspire the travel industry masses. That is Piquis Rochin. As I promised her in February, the Gringo brought his Green Bag to the state of Guerrero to find out all about this one-of-a-kind event in Mexico’s colorful world of travel. (Courtesy of the Mexico Tourism Board Los Angeles and Aeromexico)

(Having a chat with Piquis Rochin, Director of International Promotions for the Acapulco Destination Marketing Office, at Tianguis Turistico Mexico 2015)

“Acapulco is where it all started. It’s where we have the best teachers in tourism” states Piquis, who has attended every Tianguis event for the past 40 years. With Acapulco having been selected to host Tianguis for 37 of its 40 years running, there’s no doubt where this excellent “marketplace” plants its flag and proudly declares its home base.

Acapulco is a perfect example of a global destination that truly enjoyed its “period of time”, for decades actually, as it was the original hotspot for celebrities, artists, entertainers and fun-in-the-sun seeking tourists beginning in the 1950’s. “Acapulco was Mexico”, says Piquis in our conversation. “When you thought of Mexico, you were talking about Acapulco.” This was the turf of Elvis, Frank Sinatra, Humphrey Bogart. It was the ideal destination for the rich and famous, the “see and be seen” crowd, or for anyone who wanted to escape to a sunshine playground of ocean-front luxury hotels, world-class nightlife, casinos, fine dining, entertainment…and those legendary views of Acapulco Bay. Before Cancun, Cabo San Lucas and the Mexican Riviera, there was Acapulco…the place where Mexico tourism began. After a period of quiet over the past decade (and a dedicated effort to clean up its image), it is now on a freshly paved road to making its great comeback with a significant makeover in infrastructure, transportation and its service industry. With a brand new international airport, improved transport system (Acabús and Macrotúnel), remodeled main avenue and charming hotels around every bend of its scenic coastal road, Acapulco is back on the map and ready to show its fresh (and familiar) face to the world.

So, it is only fitting that the 40th anniversary of Tianguis, Mexico’s premiere travel event, would return to the Pacific coast where it all began four decades earlier…on that lovely stretch of coastline that once held the footprints of Liz Taylor, Frank Sinatra and Elvis Presley (and now the Gringo With A Green Bag’s) and would see them return on an annual basis to indulge in the grandeur, glitz and glam that originally defined this important global tourist destination. 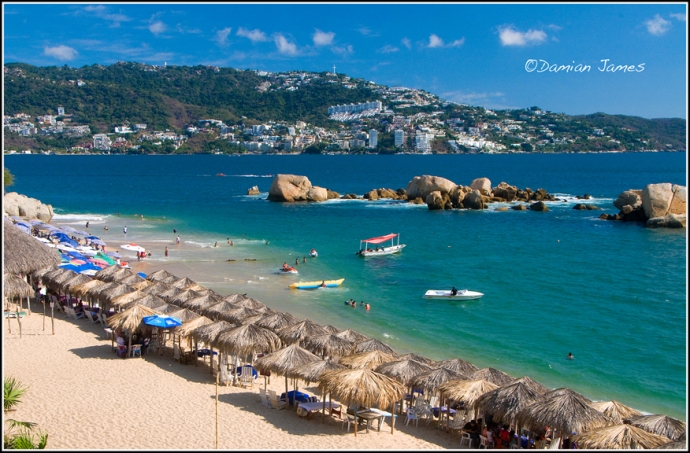 From March 23-26, Acapulco was back in the spotlight. Tianguis Turistico Mexico 2015 brought together an international assembly of media, travel industry professionals, government officials, hoteliers and destination specialists who all shared in one common goal: to promote Mexico tourism. Speaking of comebacks, in 2014 Mexico enjoyed its finest year in tourism on record, with 29.1 million visitors getting their passports stamped in this colorful country of mariachis, “magical towns”, margaritas, Mayan ruins and a slice of paradise to be enjoyed for all those who enter its borders. This was an increase of 20% from 2013, with 5 million more people visiting the nation last year. Tourism in Mexico, the country’s third largest industry, brought in a record revenue of $16.2 billion in 2014. Mexico also proudly returned to the ranks of the top 10 travel destinations around the world. This fact was reinforced often during the week long event. The message was clear:  Mexico is back…and it’s time for the world to come Live It To Believe It. (#LiveItToBelieveIt)

The official event kicked off with the ceremonial ribbon cutting by the president of Mexico, Enrique Peña Nieto, who was joined by the Secretary of Tourism, Claudia Ruiz Massieu, and several government officials representing their respective states. The ceremony was brief, signaling the start to a highly-anticipated week full of business, culture, beach, sun, Mexican cuisine and quality entertainment (plenty of mescal sampling filled in the “downtime” gaps as well to keep everyone’s “spirits” high).

On day 1, the convention began with an inaugural luncheon with a who’s who of Mexico’s top government officials in attendance, including the president himself, who spoke about the current state of Mexico’s tourism industry and the goals for the future, praising the country’s tourism efforts for what has been accomplished in recent years. After some welcoming words from the Secretary of Tourism, followed by those of several high ranking government officials, it was time to get to the main course of the event and open the trade show arena for 4 days of networking, business, entertainment and an exciting atmosphere of inspiration to be shared throughout the travel conference. Of course, a little sol y playa had to be factored in the mix as well (rule #13 in the Gringo With A Green Bag Travel Handbook: “When the beach calls, you answer”). Acapulco wasn’t chosen as the host city of 37 Tianguis events for no reason. There’s a natural draw here, with plenty of paradise and culture to be soaked up in this lively, historic and beautiful corner of the country. 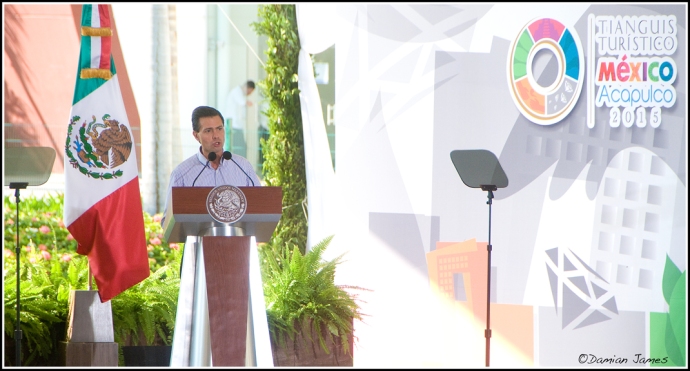 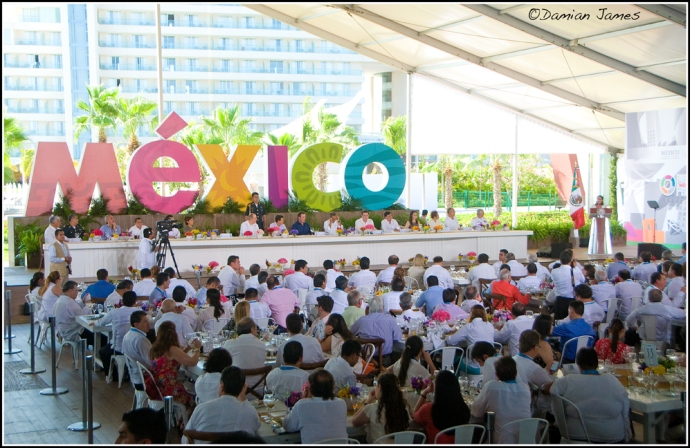 Throughout the week, a host of special events, keynote speakers, conferences and evening festivities would fill the busy Tianguis 2015 schedule. Among the guest speakers was former U.K. Prime Minister Tony Blair, apparently a huge fan of Mexico, who was on hand to discuss the future of Mexico as a premiere tourism destination, adding that “Mexico is very well positioned” as it continues “moving in the right direction”. He spoke about the strong relationship that has been established between the United Kingdom and Mexico, a strategic alliance that is being built to strengthen ties and to promote tourism. 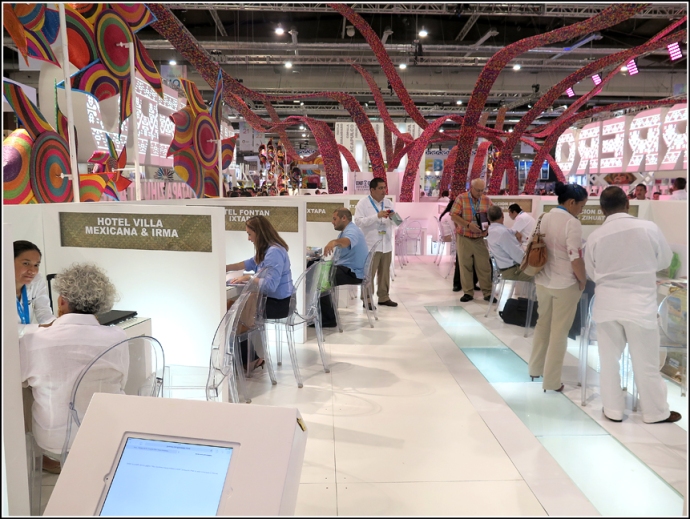 Inside the Mundo Imperial, which hosted the event, the atmosphere was as bright as the indigenous headdresses sported by the men and women working the exhibitor arena (think Las Vegas meets Chichen Itza). At times it felt like walking through a human piñata factory, with tour guides at your disposal in every aisle. As is usually the case with Mexico, a highly festive spirit was injected throughout the forum floor. With dancers form Veracruz twirling to jarocho music, lines of attendees eagerly waiting to feast on cochinita pibil tacos from the Yucatán, mescal samples saturating the palate of people passing by the Oaxaca booth, and smiling faces in their colorful traditional attire at every turn, it was obvious that this “marketplace” was one that was meant to leave a lasting impression for all of those who would come to partake. With 540 booths, over 2,400 exhibitors and 690 vendors, there were endless opportunities to learn about all the diverse attractions Mexico has to offer and sample their local flavors. After the Jose Cuervo tasting session, I was happy to boast that I had finally learned the proper way to drink tequila (notice how I said “drink”, not “shoot”…that’s pretty much the key right there. Treat it like wine, not the tequila “shot” we often (regretfully) experience in the land of gringos). My nostrils are still tingling from the aromas of fermented blue agave, citrus and cinnamon…but my buzz has long worn itself away.

Outside of the convention, various events around town were hosted by states such as Guanajuato, Mazatlan and Guadalajara, each which seemed to want to reinforce their presence by adding their own “wow factor”, featuring strong cultural elements, delicious food, strong drinks, music, dancing, entertainment and a celebratory flare of fireworks and 5 star hospitality. I, personally, was highly impressed with The Supremes cover band at the Gastronomy Celebration (hosted by the governor of Guerrero and the Secretary of Tourism) who belted out classic retro hits from the 70’s, as well as the dance moves from a few of my media colleagues. I took the night off from the mescal sampling station that night, so there was no “Do The Hustle” for this guy.

On its 40th birthday, Tianguis Turistico Mexico 2015 proved that age may just be a number, but with that number comes experience, growth, stories, adventures, and, if you’re lucky, success. When it comes to Mexico, I have a feeling the best is yet to come.

Special thanks to my amigo Jorge Gamboa Patron, Director of the Mexico Tourism Board Los Angeles, for his gracious hospitality throughout Tianguis Turistico Mexico 2015. He often refers to me as “a great promoter of Mexico”, but he is definitely the title holder in this category. If he’s ever looking to crown a Gringo Ambassador to his country, however, I will gladly accept this honorary role. 🙂 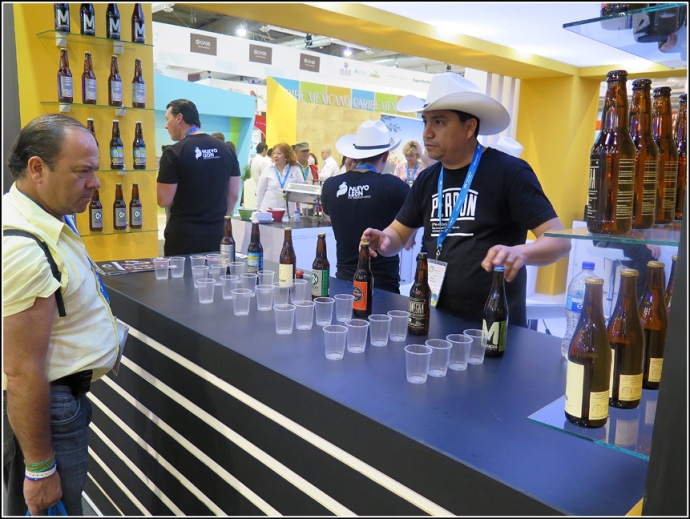