Ok, so I’m a few weeks late on kicking off this “Foto Friday” thing I committed to doing every Friday of 2014. I blame the Nyquil hangover (since I didn’t have any other shots on NYE). So, like my fellow gringo hip hoppers the Beastie Boys say…Let’s Kick It! This is an image from one my favorite places in the world…Laguna Bacalar, Mexico. I keep telling people, “wait ’til you see that water…wait ’til you see that water. It’ll make the Caribbean jealous!” This is a lagoon. White sand bottom. Warm like momma’s bathwater. An uber-chill spot on the globe that is still very much beyond the travel radar. And I’m just fine to keep it that way 🙂

Beyond the surface – exploring Mexico’s “underworld”

What if I told you I knew of a little place on the map where its truest beauty runs deep beyond the surface? A dark, sacred world that nourishes the roots of the storied land above it. A mystifying place where an ancient civilization once conducted ceremonies of worship and made sacrifices to its dieties. What would you say if I told you that for a few dollars and a shower you can visit this exotic and mysterious world and swim in its pure, crystalline waters under a natural dome of stalactites, subterranean roots and Neotropical bats? You’d most likely freak out with excitement at the opportunity…or simply just freak out. This isn’t a theme park attraction at Universal Studios folks. This is an amazing natural feature of the ancient Mayan land. These are the unique sites found in Mexico’s Yucatán Peninsula: Cenotes.

I had first heard of the cenotes (natural water-filled sinkholes) while researching my initial trip to the Yucatán several years back. Like most travelers to this part of the world, all I knew about this area was that you can climb a pyramid in the jungle, spend your days lazing on a dreamy beach and that there is a mega nightclub named after a frog somewhere in the city that represents the world’s premiere Spring Break playground. I had no idea that there was action beneath the action…like people swimming underground, diving through a network of water-forged cave passages and taking photos in their swimsuits and snorkel masks with insectivorous bats flying overhead…all while the rest of the world above is busy footslogging through Mayan ruins, sipping colorful rum concoctions and applying Aloe Vera to their sun-baked backsides. This created a fascinating level of intrigue to me…and to honor rule #3 in my Gringo With A Green Bag Travel Handbook:  When the Gringo is intrigued, the Gringo must explore!

So, months later, I found myself on the outskirts of a little village called Chunkanán in the heart of the Yucatán. I was here because my research, and some trusted natives, pointed me in the direction of a town called Cuzama, where they said some of the best cenotes were located. I had heard that there was a way to see 3 amazing cenotes via a guided horse-drawn “truck”  tour in this town, which lies only a short 45 minutes from the Yucatán capital of Mérida. But my introduction to the cenotes would not happen via this tour, rather via a result of my independent traveler-intrigued mind and faulty navigation, which led me to mistakingly pass the town of Cuzama and end up parked near a sign on the side of a dirt road several miles away that read “Cenote Aktun-Ha”. There were no tour guides here, no horses, no people, no rental cars, no hotels or post-card stands…my idea of paradise my friends! I had to see what the hype was with these cenote things. So, left turn down a road seemingly to nowhere…this is how it’s done.

I arrive at a traditional Mayan thatched hut with a few dogs outside and some children’s toys and clothing scattered throughout the area. A woman comes out of the home with a little girl by her side and I greet them with a “buenos dias”. I told the woman that I was looking for the cenote. She pointed to an area behind the house and said that she would lead me over to it. She politely asked for a donation of about 40 pesos ($3) to see the cenote. I eagerly paid her, and suddenly found myself face to face with this… 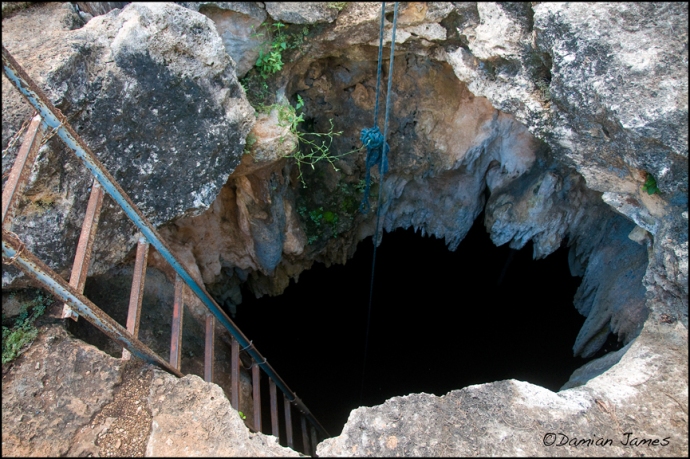 “Whooooooaaaaaa!”, I uttered in Spanish (it translates the same, I think)…then proceeded to back up a bit.

Are you kidding me?? Now I’ve done some risky & adventurous stuff in my lifetime, and have always come out alive, but usually I can see what the hell I’m getting myself into. I can’t even see the bottom of this thing! It’s pitch black down there! Holy Sinkhole, Batman! Heck, even the Dark Knight himself would probably think twice about scaling down that iron death rail. As a matter of fact, that’s exactly what it is…an old rail track from the henequen industry days, welded to another one below and converted into a ladder. Look at how it’s rigged…rusted chains and weathered rope bound to a suspect piece of rock…is there an insurance policy included in that 40 pesos?? And what was that other rope for? To carry out the remains of unfortunate tourists who never made it back up?? Ok, calm down…after a few deep breaths and a reinforced blessing of confidence by my host, I tightened the straps of my green bag, checked the structural integrity of the ladder and headed down into the darkness.

Descending the vertical railway into this dusky cavern was an adventure all to itself. It felt sturdy enough (a bit wobbly), but at about 40 feet up from the bottom, there was ZERO room for error. One slip and you’ll be considered the next sacrificial subject to the Mayan Rain God, Chaac. I slowly lowered myself down in true baby step form, headed towards a glimmer of water down below at the base. (You really don’t want to look down, as they always say.) I noticed a good number of spider webs criss-crossing the corroded metal frame that was functioning as my life support, which led me to wonder when the last time was that someone had actually been down here. Then, all of the sudden I hear an eerily familiar “squeek, squeek” sound. Yup…you guessed it…freakin’ BATS! Two feisty bats zipped right across my head, with several others hanging from the ceiling of this crazy underground Legend of Zelda looking labyrinth, which just made me want to get to the bottom faster. I finally get to the last few steps and find them submerged in about a foot of water. Damn. Off go the shoes I guess. There just happened to be a bucket within reach on the end of that rope, which I’m sure is intended for retrieving water and not for storing Nike cross-trainers. But walking around all day with soggy feet sucks, so it served a practical purpose for me.

Once I was able to secure my footing and get a 360 degree view of this place, I was left stunned. You can’t even imagine that something like this exists below the ground above, which is pretty much a flat, consistent layer of porous scrub jungle. This was an outer-worldy underworld. What time was the warlock returning to close his sky roof I wondered? It’s obvious why the Maya viewed the cenotes as sacred sites and portals to the next life. This place emitted strong metaphysical vibes concealed under a dome of unimaginable beauty. The fresh cenote water (home to a rare species of eyeless fish) is as strikingly blue and clear as you’ve ever seen. Formations of stalactites and stalagmites above and below face off like armies on opposite ends of a battlefield. The air was thin & humid and I was melting like a snow cone in Sedona. A splash of crisp cave water on the face never felt more refreshing. I spent a good 45 minutes down here all by myself (except for those bats dangling overhead), photographing the details of this murky and fascinating underground lair while sweat steadily dripped down on my dewey camera with the frequency of a metronome. This was an amazing experience. And to think, had that little section of limestone rock not caved in from above, this place would have never be seen by a human being. That’s the beauty of the cenotes…there are literally thousands of these throughout the peninsula, most of them still undiscovered. Luckily for us, many of them have been discovered, and you don’t have to go far from wherever you are in the Yucatán to see one. Now, hold that ladder lady, I’m comin’ back up! 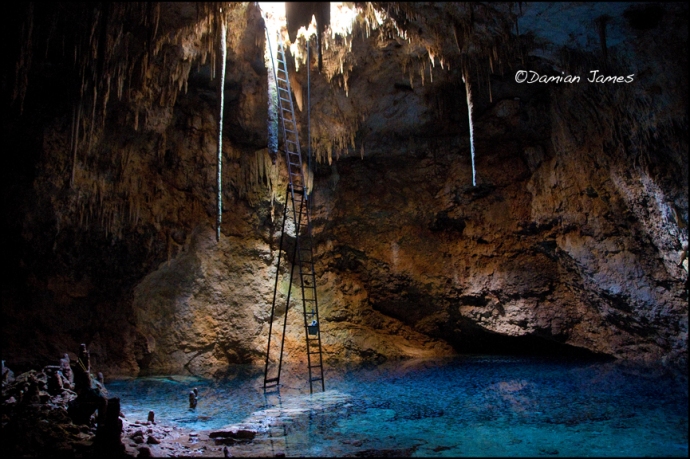 Since that initial Indiana Jones escapade down into my first cenote, I’ve had the opportunity to explore many more, and they are all glorious. They definitely earn top rank as the highlight of my experiences in the Yucatán Peninsula. Besides their remarkable beauty, they are all so unique in size, ambience and form. While most are found underground (easy to access, thanks to the locals who maintain them), there are also many that lie right on the surface. To attempt to describe each one with a worthy level of descriptiveness would grossly over-estimate my ability to do so. Therefore, I’ll shut up and let the images do the talking. All I can say is, if you come to the Yucatán, kick off your shoes, put your adventure hat on and get to know these unique natural wonders that the Maya dubbed “Ts’onots” (“wells”), referring to any place with accessible groundwater. Some are more easily “accessible” than others (as I learned from my first cenote experience), but the true adventure lies in one’s willingness to explore the unknown.

Contrary to popular belief, the Mayans never attempted to predict the “end of the world”. However, they were among the lucky few to discover sites like these…where the physically familiar world we know ends, and an unfamiliar one begins. That, my friends, is what draws me to travel. Encounters with the unfamiliar always result in fresh ink in the diary of life experiences. So get your pens ready and add Mexico’s cenotes to your bucket list. Just don’t forget your shoes on the way out. 😉 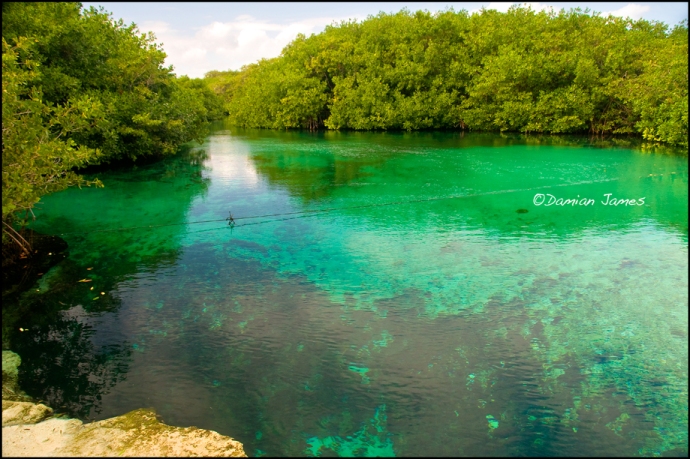 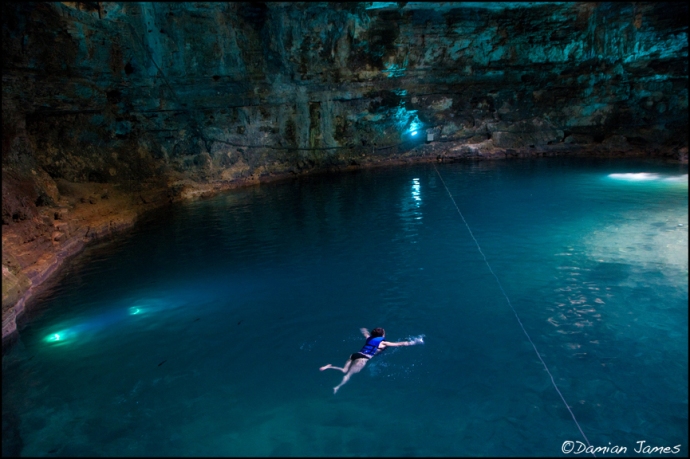