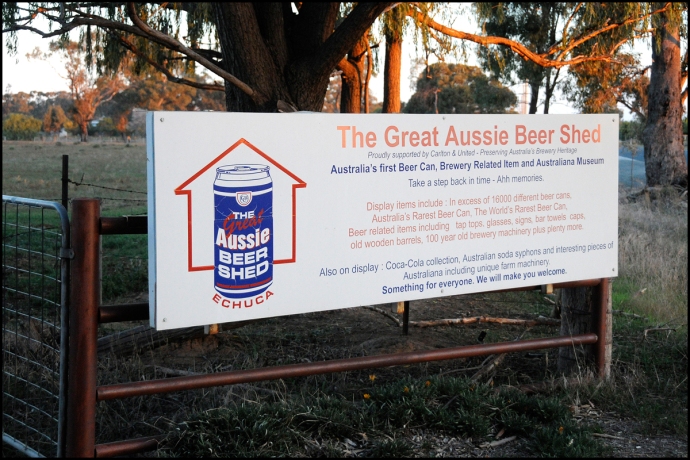 One of the highlights of my trip to Australia, The Great Aussie Beer Shed is one of those out-of-the-way places you won’t hear a peep about from travel agents and tour guides.  It’s an independent traveler’s (and beer enthusiast’s) oasis at the end of a dusty road in the middle of somewhere/nowhere Victoria, Australia.  I had taken the 3-hour drive up this way from Melbourne to see the Murray River (Australia’s version of the Mississippi) in the town of Echuca.  Echuca is famous for its steamboats, which are still a common means of transportation in this old colonial outpost.  Three hours on the road to see a steamboat and a river…yeah, a bit overzealous, I’ll admit.  What was I thinking?  I’ve been to Tom Sawyer’s island a dozen times at Disneyland and all I wanted to do was get back to Space Mountain.  Don’t know what I was doing up here really.  It was a nice drive through the countryside though, and a little taste of history…something most Australians will admit they have little of. A bit disappointed with the Huckleberry Finn section of this road trip, I decided to start heading back to civilization when I came upon a sign that pointed me in the direction of “The Great Aussie Beer Shed”.  Now this sounded interesting.  I was pretty damn thristy too.  I decided to add this little de”tour” to the agenda.  I cruised down a dirt road and arrived at a vacant parking lot next to a huge aluminum shed.  No cars, no people, no dogs…nothin’.  I walked around the grounds a bit and realized that this place was closed on this Monday afternoon.  Crap!  My palate was all fixed on throwing down some brews and at least seeing something more interesting than a riverboat on this 8-hour day trip.  All of the sudden, as I’m walking back to my car, I hear a man shout out “How can I help ya mate?”  It was the owner, Neil, a jolly looking Aussie country dude who seemed surprised to see any visitor that day.  I told him I had come for the tour and he told me that he didn’t do any tours on Mondays. He asked where I was from, and I responded “I’m from California”.  His face lit up in surprise as he came back with…”Bloody hell, you’ve come a long way for a beer mate!  Come on in, I’ll give ya a look”.  This was awesome…my own personal one-on-one tour with the maestro himself!  We walked in, he had me spin a wheel to win a prize (won a hat and some beer holders), and we cracked a few Victoria Bitters to get things warmed up. 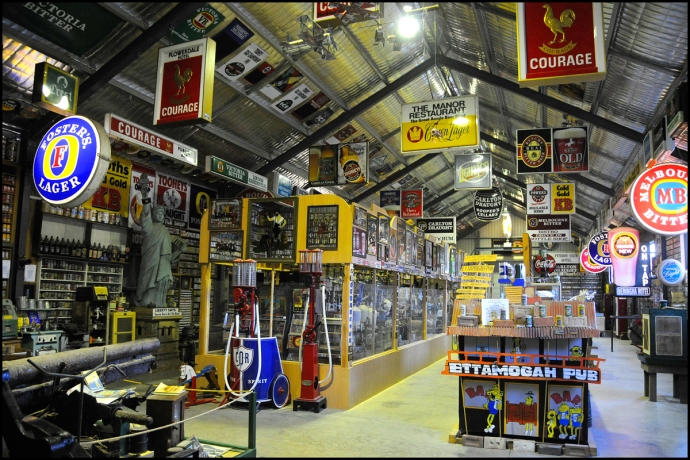 Now this place is my idea of a great local travel experience!  This guy was beyond just a beer expert or enthusiast. Brew culture and beer was in his blood (though mostly in his belly).  He had the most impressive collection of beer cans, bottles, barrels, artifacts, antiques and knowledge of beer of anyone you could ever imagine!  Over 17,000 beer cans from all over the world in his collection…including some vintage cans that were once banned for depicting sexy women on the front and some of the first beer cans ever manufactured.  He explained how he started his collection over 37 years ago, as an “obsession”, and how he grew his beer shed to this 5000+ sq. foot aluminum “Smithsonian” of beer and brew memorabilia.  He even took me out back beyond the shed, showed me some antique farming equipment and told me about his plans for expansion in the coming years.  Neil was a great guy.  He talked a mile a minute, the human version of an audio Wikipidea page…full of plenty of sharp, witty one-liners coated with that classic Aussie sense of humor.  He walked and talked me through nearly every artifact and display that he had in his shed.  Most importantly of all to Neil, he makes sure you are never empty handed while in his presence.  The third round of VB’s pretty much guaranteed that I would be staying longer than I had originally planned.  The tour was very informative and fun, and seemed to get more enjoyable after every sip.  Of course, at the end of the tour I had to ask Neil the million dollar question: “So what’s your favorite beer?”  His response: “Me next one mate!” So if you’re ever in Australia and are looking for a unique and authentic side trip up through the historic region surrounding the mighty Murray River, be sure not to miss The Great Aussie Beer Shed.  Oh, and make sure you pick up a copy of Slim Dusty’s “Beer Drinking Songs of Australia”. 🙂 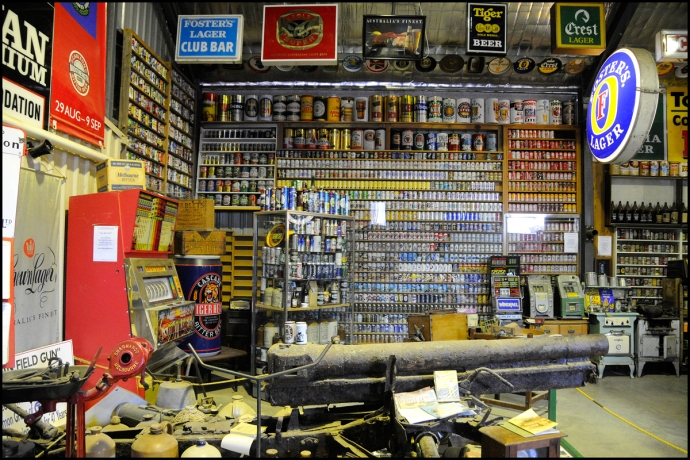